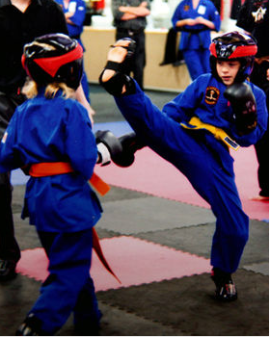 A LITTLE girl fought off a 6ft brute by instinctively using her karate skills.

Brave brown belt Jade Pidden, 11, had been shadowed by her attacker before he pounced.

But the plucky schoolgirl used her three years of karate training to deliver an elbow to the chest and a punch in the face, forcing him to flee in agony.

Jade, who was with twin sister Amber, said: “I had walked ahead of my sister and her friend when I saw a man following me.

“I ran away but he grabbed my bag which was over both my shoulders on my back. He was trying to attack me.

“He looked pretty shocked and ran away with his hand over one eye.

“I was quite upset but my sister and her friend comforted me on the rest of the way to school.”

Teachers at her school in Stockwood, Bristol, called her parents and the police.

Jade’s dad Stuart, 33, a mechanic, who believed the attack was an attempted abduction, said: “Jade just lashed out.

Clearly three years of karate lessons have paid off.”

Mum Carly Maughan, 31, a nursing home housekeeper, added: “I’m so proud of her. She was very brave.”

Simon Hall, Jade’s instructor at Bristol Martial Arts Academy, said he would put her forward to become a black belt.

He added: “It just goes to show a little bit of training can go a long way.”